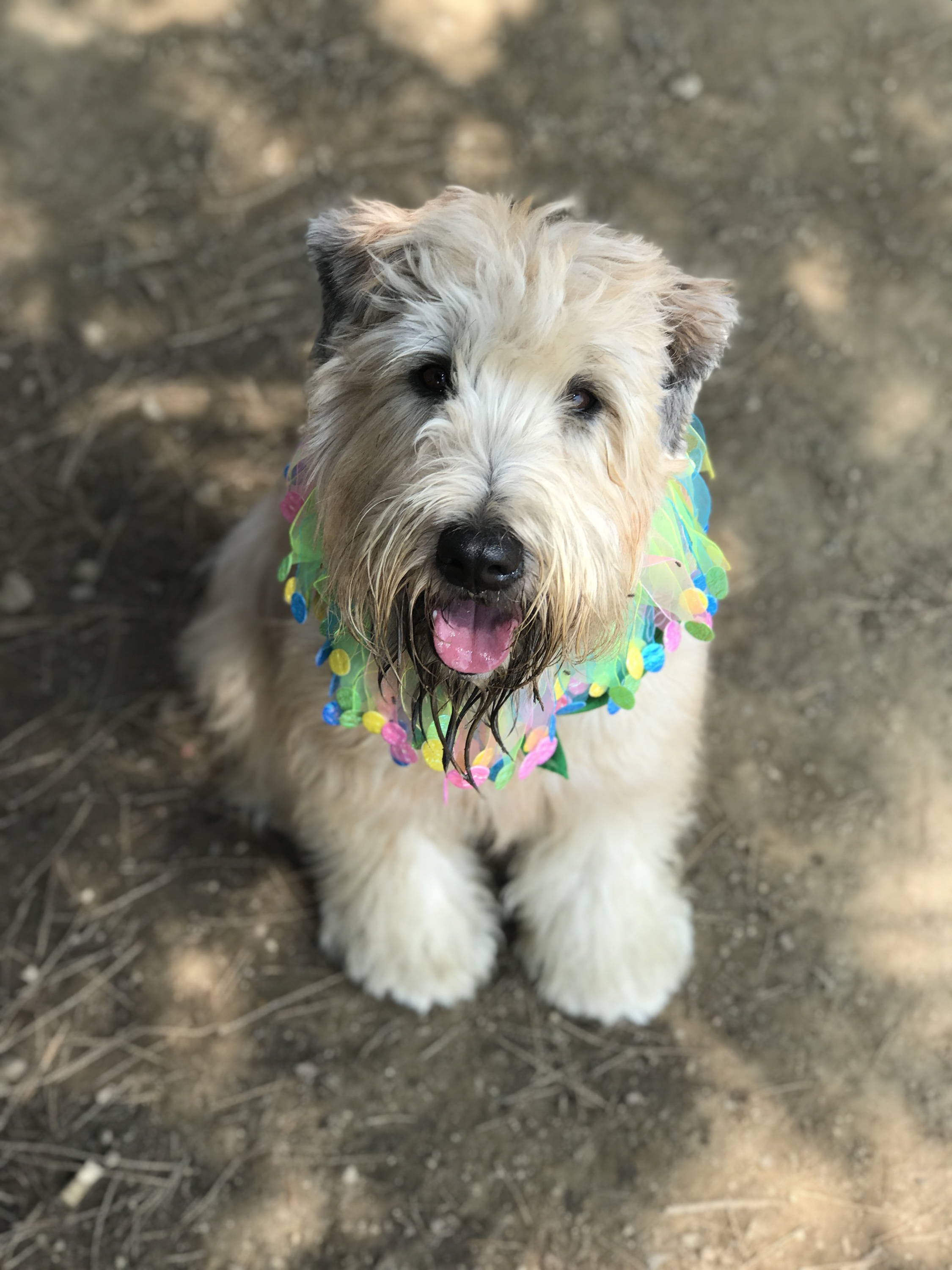 Along with bulldogs, wheatens are prone to chronic skin issues and they can be pretty hard to cure, especially if, like me, you are committed to going the holistic route.

Her rashes first showed up in our last house about a year and a half ago. She turned out to be our "canary in the coal mine" for toxic mold we'd probably been living with since she first came home as an 8 week-old puppy. It occurred to me one day that there might be a connection between her rashes and the strange stench we couldn't get out of the carpet that she was lying on all day.

We moved out of that house and she got better. For a while. At one point, she had fleas and we suspected the rashes might be flea allergies. So I dusted the house with an organic flea killing powder that left a thin residue of dust on the floor for months, and spent an hour in the shower washing her with flea shampoo every day for 3 weeks (Another fun fact about the wheatens at least that I know and get to live with- they thrash around when confronted with water like you're spraying them with a chemical weapon. Slight exaggeration.)

I did a few Nutriscan tests. Honestly I'm a little dubious about a test that tell me my dog is definitely allergic to lamb but salmon is fine and then two weeks later another test says salmon is fine but lamb is off limits. I do believe there can be food sensitivities to some degree, so I experimented and it seemed like rabbit agreed with her, and it did. For a while.

And then this spring something happened. 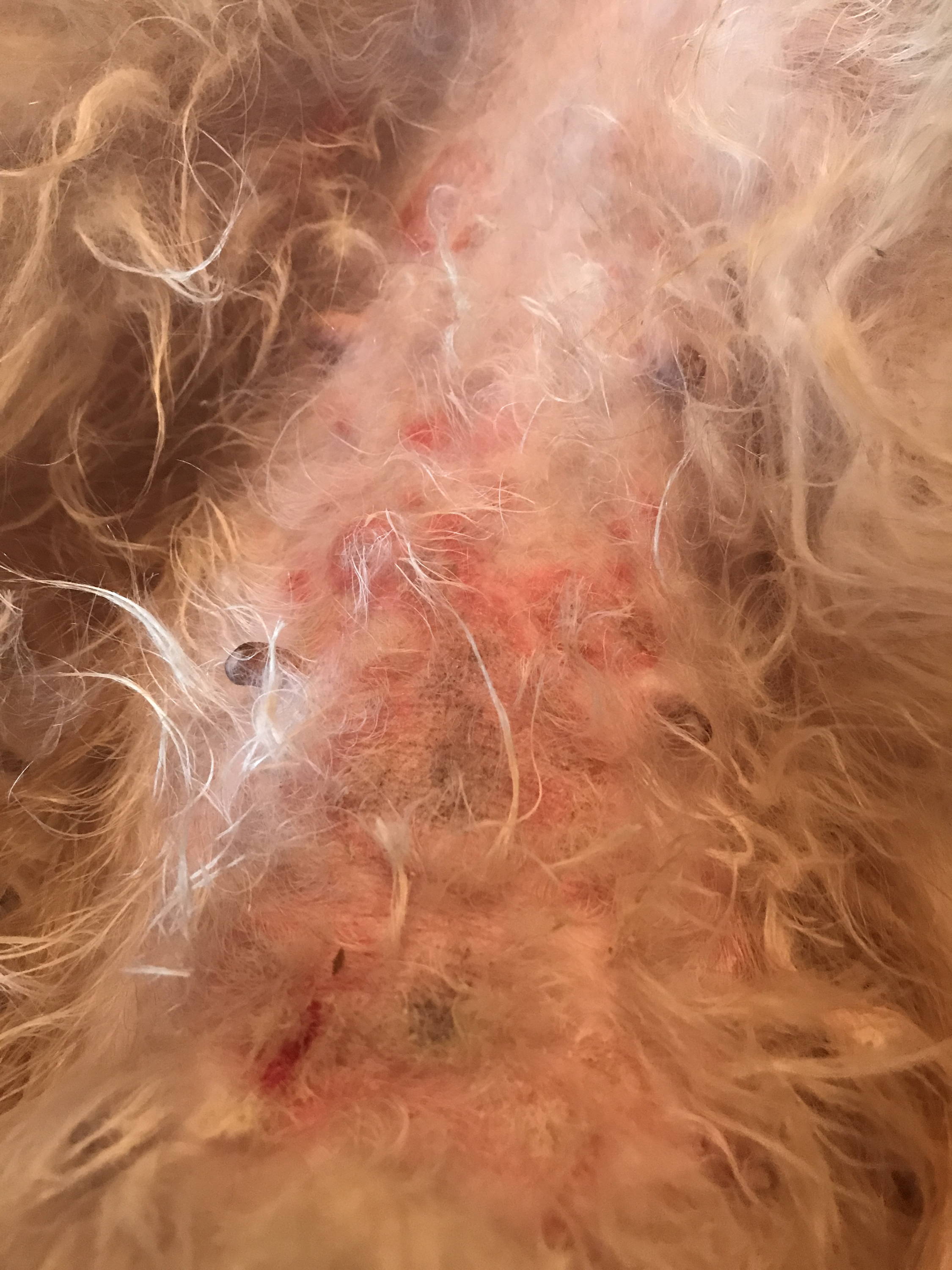 It started, as usual, on her belly (pictured, sorry I know it's gross). And then it spread, underneath her legs, on her back. There were spots where it was raw. I took her to two holistic vets, both of them wonderful. Both of them suggested antibiotics might be necessary, but let's try some other things first. I was down with that.

Coincidentally she had an appointment with her original, traditional vet, for her yearly checkup. At this point, I was beyond frustrated. It was painful to watch her scratching all the time, making things worse, so when Dr. Martin suggested antibiotics my gut feeling was yes.

Let me say I am not against antibiotics. But when a doctor once wanted to put her on a course for a simple eye scratch when she was a puppy, that seemed ridiculous. The immune system can really take a hit from antibiotics, and it's a shame that some veterinarians (and doctors) over prescribe them.

But this time I said OK. He also asked me what she was eating, and I told her that after a lot of trial and error with different proteins, we'd landed on rabbit being the one that worked best for her.

"How long has she been eating rabbit?"

"Well that's probably it. You've got to rotate the proteins. Even when you find one that works, it's not likely to work for more than 2 years."

Coincidentally, I'd just read an article from Dr. Dodd about the importance of rotating proteins to get a wide range of minerals and nutrients. Read this.

So at the same time we started the antibiotics (I doubled up on her goat's milk and added a stronger probiotic capsule than her normal one), and I began a week long transition from rabbit to duck.

And while it's only been a few months, her belly looks better than it ever has in her whole life, and the rest of her body is clear as well. As any parents of a dog with chronic issues can attest to, there's almost as much relief on our end watching them lie still without scratching, as there must be on their end.

There are many options we didn't try for Hazel. There is a new allergy shot (sorry I can't remember the name) that is showing great promise for dogs and doesn't have to administered twice a week like the old ones. As always ask your vet. Lots of my bulldog friends use charcoal baths and add turmeric to their dog's food. I love turmeric, obviously, that's why it's in every one of my Sally Snacks flavors. Flea allergies can also be an issue. Personally, I won't have anything to do with putting poison on my dog's skin (skin is the largest organ on the body), but I don't judge. Instead, we use an amber collar and I spray her with an all-natural Wondercide flea and tick spray every time she goes for a hike.

I'll be keeping an eye on Hazel's skin of course, and while I hope we don't have to do any more antibiotics for a while, I'm not as rigid as I was about them. Western medicine has its place and there are lots of wonderful vets and procedures we owe to them. I'm just glad she's feeling better.

Sign up here for free treats, 10% off your first order!